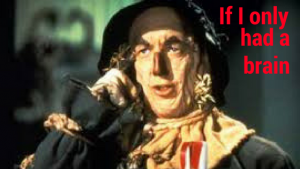 So today I have been to a seminar. I didn’t know what a seminar was until I booked to go on one. It’s a fancy name for lots of people having a chat about something. And it was really good…

Since we set up Good Wolf nine months ago I’ve been thinking about doing some learning related to what we do. I suppose it’s a bit like the Scarecrow from the Wizard Of Oz. I can do this stuff. I can do it well! But I want a little bit of paper to prove it.

At least, that’s where the idea started. But I’ve come to realise as I’ve been researching courses that what I really want is the space, structure and peers to practice with. I want to share skills, try things out, attend tons of other people’s workshops and have the time to read up on the theory behind the tools and techniques we use.

So having found the perfect Applied Theatre course, my only stumbling block was that it’s an MA (I think – it’s the one for people with degrees anyway) and I only have a handful of O Levels, a couple of A Levels and a ribbon from Puppy School.  How could I ever cope with all the clever stuff??

Well, I’ve sat in on a session now and actually I could!  Of course I could! I love what we do and I love learning about it. The students and lecturers are great and I have a fantastic support network around me, including lots of friends with loads of certificates for clever stuff who’ll help me if I get a bit stuck.

What I’ve decided today is that academics aren’t scary and I’m not nearly as thick as I thought I was. It’s amazing when you realise the only person who thought you couldn’t do it was you!

So I look forward to applying, getting on the course, learning LOADS, then at the end being able to spontaneously spout Pythagorus’ theory while someone leans over and whispers in my ear: “I think I’ll miss you most of all.”
Love Johnny Wolf X
Applied Theatre, Learning
Share Post: