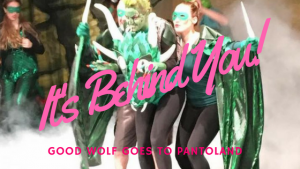 So… last week the Wolves took another trip to the theatre, only this time – it was a panto!!!  Oh yes it was!!

Let me just state for the record: I hate pantomime. Really. It’s almost a phobia. Given the choice between watching a panto and rolling around on a bed of hedgehogs? Well, sorry hedgehogs, prepare to be flattened.

So why did I go to this one? Because this panto was George And The Dragon as performed by the totally wonderful Phoenix Players.

Phoenix is a community theatre group that’s been around Norwood for almost 30 years and recently Good Wolf were lucky enough to run a Vision Workshop for their committee. We loved how their vision of inclusivity and creating a safe space for people shone through. And it shines through on stage as well.

They write their own pantos, using popular songs to further the narrative. This year the script was an absolute joy. The chorus burst into a mash up of Alice Cooper’s “Poison” and Britney’s “Toxic” when George got bitten by the venomous dragon, terrible jokes were flagged up as just that and there were some clever nods to those classic Phoenix “Play That Goes Wrong” moments. Of course for the Cornley Polytechnic Drama Society everything that Goes Wrong is written into the script, whereas with the Phoenix Players… if the lyrics that are being held up for the audience to sing along to aren’t quite the right ones or the smoke machine goes off in someone’s face you can guarantee that it’s as much of a surprise to them as it is to us.

But you’re never laughing at them. Only ever with them.

One of my favourite moments in George is when the eponymous hero, his Squire and some witches they picked up in a bar (trust me, it all makes perfect sense) are crossing the desert and get attacked by rocky-sand monsters (really, it does). As they belt out that well known Police classic “Rock-Sand“, the stage managers wave a length of yellow fabric (quicksand of course!) at the front of the stage. Half way through the number I get a nudge, look to my left and see Kelly Wolf on stage waving one end of the sheet as the stagehand takes a rest. A great gag I thought, cleverly woven into the script in that very Phoenixy way of gentle self-mockery. Well, no actually. Turns out the stage manager just got tired arms, needed a rest and recruited some help from the front row!

I honestly haven’t laughed that hard in ages. It was a magical night out and best of all you can just see the love radiating from the stage. These people are having the time of their lives in a most infectious way.

If you live in SE London and are looking to join an am-dram group that’s more like a big family, then look out for auditions for their next production (Dolly Parton’s “9 To 5” on right here at Stanley Halls in October).

Thanks you Phoenix for all the love and laughs!