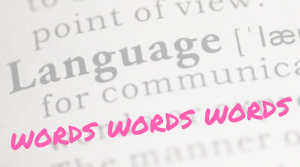 This week I had my interview for university (I’ll keep you posted). It felt good, not least because it included a fascinating discussion on language…

For years I’ve taught workshops on non-verbal communication. The perceived wisdom is that it conveys 70% of our meaning, as opposed to the 30% we get across in words. But more and more we converse with the written word, and often within restrictive boundaries.

It’s hard to be fluent or nuanced in 140 characters. Facebook actually makes your status bigger if it contains fewer words. Even blogs, we are told, should be no more than 300 to 500 words long. (Don’t count, it’s never going to happen here. We try. We fail.)

Discussion becomes argument, ideas are reduced to polar extremes and whether they are written with articulate, biting sarcasm, or SCREAMEDINALLCAPS WITH.NO.GRANDMA.ANDBAD.SPELING, the babble of voices rarely makes a meaningful point or creates a discourse that can shift opinion. Instead increasingly turbulent times push us to fire out unhelpful and unpleasant words with alarming regularity.

The backlash against Political Correctness has fuelled an acceptance of the language of extremes. I wish “Political Correctness” had never existed. As practitioners in social settings we choose our words carefully to influence the world around us. We also choose when to challenge language. I believe in challenging the language of hate, but sometimes terms I might find offensive aren’t intended that way. If I’m working with a group of young people whose shorthand language includes words or phrases I don’t like, I might say “actually I’m uncomfortable with that because…” but I hope I never come out with “don’t say that!”

Telling people what they can and can’t say is a sure fire way to close down discussion, put up barriers to empathy and understanding and basically get right up people’s noses. Being told once on training not to say “brainstorm” as it could offend epileptics was a jaw-dropping moment. I may not have an extensive network of epileptic friends, but the people I checked with who do have epilepsy were just as horrified as I was by the patronising, cringeworthy replacement put forward and I can safely say that none of us has ever invited anyone to join us in a “thought shower”.

Words contain power. Power shifts with time and circumstance. Spelling and meaning never stood still until the introduction (imposition?) of the modern dictionary. But a book can’t freeze language. The dictionary has to be constantly updated as we continue to change the meaning of words through our everyday use of them.

The phrase in my interview that kicked off this conversation was, “Applied theatre gives voice to communities”.

That sentence was written some years ago as a celebration of achievement. But as time passes and we learn more about what we do and how we do it, the phrase I would choose (at this moment in time) is: “applied theatre provides a platform for the voices of communities”. A small difference but a really important one. In the first version the practitioner holds the power, in the second: the community. And that shift in language represents a huge shift in practice. I choose different words to convey a new meaning.

Language is fluid. Words are powerful. And right now is a good time to have a reasoned conversation about that.

So, instead of throwing words like bombs, let’s talk about them, about what we mean, what we’re really trying to say. Let’s question others, let’s question ourselves. And let’s try to use kind words to do it.