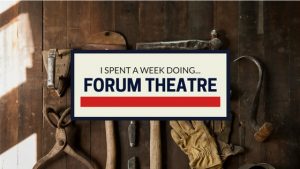 I’ve just spent a week training with Cardboard Citizens. First thing to say was that I got a lot from this week, ideas, confidence, experience, laughs, insight and I would recommend it to anyone who has dabbled and explored some of the methodology that stems from the work of Augusto Boal. We were learning about Forum Theatre.

What is forum theatre? Put in my words… a group of people put on a play which is based on a common oppression and their real stories and struggles. There is usually one central character who is clearly experiencing an oppression of some sort and the play shows us the journey of the character to some extreme but real outcome. After the performance the audience interact with a ‘Joker’ (a facilitator) who helps them explore the play, re running elements of the performance and inviting audience members to stop the actors and replace the central character to attempt a different outcome based on what they would like to do. The aim is not to solve the scene, story or oppression, but to have the audience (who should relate to the performance) consider, interact with and explore the issue in front of them.

For a better explanation start with Cardboard Citizens web page for some background and videos!

Cardboard Citizens make a point of not running this course too often, it felt like our facilitator, Adrian Jackson was attempting to learn just as much from us, and it never felt like we were going through the motions of an exercise. Adrian emphasises the importance for him of the facilitator taking enjoyment from the group and the activities he was leading. There were facilitation techniques he used that I will take forwards in groups I work with in the future, I love it when you see something that’s so obviously a good idea and you think WHY DIDN’T I THINK OF THAT BEFORE!?

We finished the week by working in groups to create our own forum theatre performances. Our group performed a piece on the (broad) theme of gender oppression and we got to work with our audience to forum our work which was awesome, scary and fascinating.

How will this impact on Good Wolf? I think it is such a sensitive medium for exploring issues conveyed through stories. When we talk about wanting people to be heard and understood I struggle to think of many better ways to achieve this. So I am on the lookout for people who want to play with forum theatre, I would love to hear from anyone who would be interested in participating to experience some of the techniques and games and to work towards constructing a piece of forum theatre as part of a group.