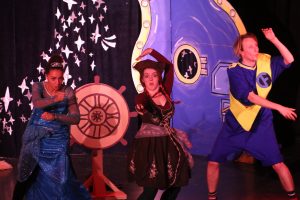 Yes OK we know, Christmas was ageeeees ago! But we thought we would wait until your Christmas pudding had finally digested, and the last Christmas trees were down before we started mentioning it again. So in case you didn’t know, this is what we got up to over the festive season…

Preparations began in early October 2017 for Good Wolf’s second production of Captain Fantastic. John  wrote the play to be performed in time for Christmas. This time the Captain and his friends would travel the world thwarting the evil Dr Zobs plans of destroying winter. On their adventure they would meet dragons and sharks and of course tell lots of jokes. 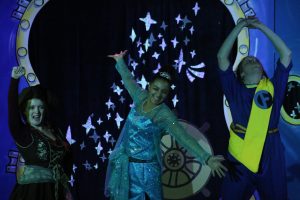 Good Wolf had seven performances to prepare for. Two shows at the Citibank children’s day in Canary Wharf, a free show at the Winterbourne Youth and Social Centre in Thornton Heath and four shows at Stanley Halls in South Norwood. As John directed the actors in an intense week of rehearsals Kelly and Ian continued to promote the shows and of course make a few props. As we had seven shows over three days and in three different venues it was all hands on deck. 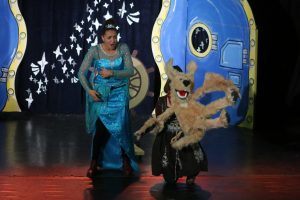 Thursday 21st December was our first two performances at the Citibank Children’s Day. We all arrived early to set up the show in their 150 seat theatre. Children had a great time and we enjoyed a full house for both shows! We received many thank you’s after the show from children and parents alike. Then it was back in the van to speed over to the Winterbourne Youth Centre in Thornton Heath for our next 4pm show.

Winterbourne is a wonderful old Victorian building with a great stage and auditorium. It is used by the local community for many different activities and when we discovered that there hadn’t been much theatre performed there recently we decided to do a free performance for local families who may not get the chance to see a show . We had 30 wonderful people in the audience, the children were mesmerised by Captain Fantastic and his friends, then at the end when we had the join in disco absolutely everyone, including parents, were on their  feet dancing. It was so lovely to see these families having such a good time together! 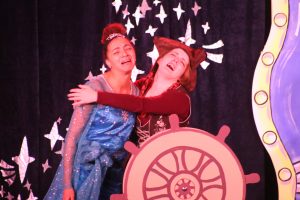 Then it was back in the van for our final journey  to Stanley Halls, Friday 22nd and Saturday 23rd December 2017 we had two daily shows at 11am and 2.30pm. Stanley Halls was bursting with Christmas cheer. There were decorations galore and at least 10 Christmas trees, the perfect setting for our show.

Those two days were great fun. With 100 seating capacity per show the morning shows were completely sold out and the afternoons were 70% sold out. Local families laughed, cheered, hissed, booed and danced throughout the shows, and left us feeling thoroughly festive!