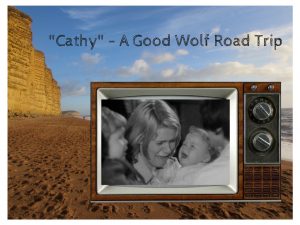 Cardboard Citizens has been making life-changing theatre with and for homeless people for 25 years and it’s 50 years since Ken Loach’s groundbreaking film Cathy Come Home was first screened on the BBC. It was watched by a quarter of the British population on first transmission and its uncompromising portrayal of an ordinary woman’s journey into homelessness had an impact that’s rippled through the following decades.

To mark these significant milestones Cardboard Citizens have been touring “Cathy” a powerful modern re-imagining of the story told in the film. Cardboard Citizens are the UK’s leading practitioners of Augusto Boal’s Theatre of the Oppressed methodology (a toolkit that the Wolves use all the time), so going to see this play was an absolute must. So much so that we travelled to Bridport in Dorset to see it!

Bridport was brilliant! We had no idea it was the Broadchurch location, all sweeping Jurassic cliffs, gorgeous dogs and friendly people. And the Arts Centre where the show played was a great venue, attracting a good crowd of locals all passionate about addressing homelessness.

And the play? Just incredible! Ali Taylor‘s heart-breaking script was performed on a set that looked so simple, but added so much to the show. What looked like a giant Jenga tower was used to construct sets, demonstrate internal emotions and as a backdrop for projection. Film played against the wooden tower transformed it into a block of flats, while a soundscape of genuine interview clips was a powerful reminder of the reality behind the play.

The cast was outstanding, giving us a Cathy and daughter who were painfully real throughout, whilst the two remaining actors brought to life everyone else in their world with impressive ease. But that was just the first half…

After the interval the actors really stepped up to the mark as they dropped in and out of any requested part of the play so that members of the audience could come up and play Cathy. The idea was to see whether, by doing something differently, she could have had a better outcome. We’ve used this Forum Theatre technique many times, but never seen it on this scale before. It was impressive and exciting and probably told us as much about us, the audience, as it did about the characters.

So thank you Cardboard Citizens and Bridport Arts Centre for an inspiring and motivational road trip. And thank you geology for the stunning cliffs.